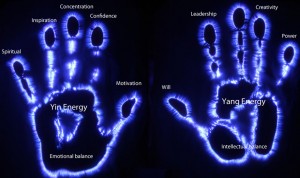 What is this electromagnetic field that radiates around the physical body that we can see around a Kirlian photograph of the hands?

Perhaps it is the vital force that is spoken of by homoeopaths.  Martin Miles seemed to think so.  He was one of the most innovative pioneers of homoeopathy, largely responsible for its twentieth century resurgence in the UK by establishing, with Robert Davidson, the first teaching school for non-doctor homoeopaths in 1978.  In his book, he states that the vital force is electro-magnetic in nature and ‘is that which is visualised by Kirlian photography’.  This opens up much information about the field for we can turn to the old masters of the art, Hahnemann, its founder in the 18th Century and Dr Kent, American 19th Century homoeopath.

The information on the Vital Force describes a simple substance that pervades and directs our physical-chemical bodies.  It is the formative force at the back of the form.  It does not just surround the subject but instead occupies the same space, interpenetrating the cells and spaces, and extending its force field slightly beyond the physical form.  Instead of being a creation of substance it is the force before substance, a creative blueprint, directly issuing to your atoms the data instructions for their renewal and activity.

The integrity, congruence, luminosity and vitality of the field give formative information to the cellular substance and instruct the material.  It is the energy body that keeps the physical form continually renewed and vitalised.  It is this body that the dynamised remedies used in the homoeopathic medical system are directed, based on a reasoned set of principles that assume the vital force to underlie the physical form and function.

The nature of your feeling-tone or beingness feeds the fields around you, most densely into your own surrounding radiation, altering and determining their quality and then more weakly into the fields beyond your own atmosphere.  The nature of the emanations tends tp seek their likeness and gather to themselves similar fields. You as a unique field tend to absorb and recycle your own atmosphere and its likeness; in this you are renewed in the likeness of your own output.  You attract more of what you are at present and what you exude.  You are surrounded by all types of fields but attract mostly those with which you resonate, which are on your wavelength, which you feel ‘in tune’ with.

The Kirlian photograph is remarkably responsive to fluctuations in your state of happiness and wellbeing.  If you are upset the field generally develops gaps and weaknesses in certain areas and if you calm the waters of your emotions the field generally responds by becoming stronger, more continuous, more definite and brighter.  We can use the Kirlian photographs as feedback to adjust and create the conditions for congruence, luminosity and balance. 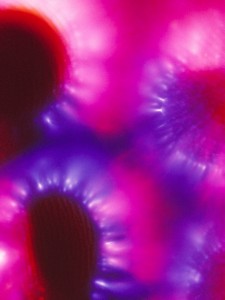 The field around you forms your atmosphere. It melts into surrounding atmospheres attracting its likeness and repelling unlikeness.  Remember it is electromagnetic and you can easily visualise the attraction and repulsion powers displayed by a magnet.

You cannot see the force that pours from the magnet but you can see its effects and feel the push and pull.  You do the same.  You push and pull fields and experience them as things and events. You feel comfortable in certain places and with certain people and experience the opposite with others.  But some of the stuff you experience does not make you feel happy and this is where it is useful to examine your Kirlian photograph for field feedback.

Much of the quality of your field is formed by habitual thoughts and emotions and opinions.  They can be so habitual that they are invisible to you as prison bars and you may have become unaware of the notions you entertain.  A Kirlian photograph can draw your attention to these habits and this is so helpful because awareness is the beginning of possibilities of realising you do not have to believe what you believed five years ago. It is not set in stone. Sometimes this is a revelation.

Often the incoming and outgoing forces loop around in the same dance and remain so by inertia unless some new element enters to create fresh input and consequently a change of conditions.  A new element may fortuitously come from without, yet you are then waiting for a lucky strike, and you have the power in you to make a change from within.

If you want to get happiness you can.  If you want some pointers to where you might focus you attention you can get it from a Kirlian photograph with a reading by a skilled interpetor.  If you want to really get the most out of the experience it will help you to understand something about the processes that determine the field.

Invisible fields of weak electro-magnetic radiations are accepted by scientists, used in experiments and equations.  Edward Whitmont, psycho-analyst and homoeopath wrote extensively about fields in ‘Force ad Form’.   Lynn McTaggart has investigated The Zero point field.  Lyall Watson, writing of Supernature, noted the curious effect of new learning, say an unknown language, in allowing others, anywhere in the world, to learn it more easily.

Many discoveries are reported to occur simultaneously at random places throughout the world.  Inexplicable happenings can become explicable if the existence of unifying fields is included in the equation.  Rupert Sheldrake has made their study the pivot-point of his whole career, coining the phrase morphogenetic fields and conducting numerous and intriguing experiments around the issue of morphic resonance. Morphic resonance is the attraction of fields containing similar qualities. Physical matter is subject to inertia and tends to stasis.  It is dependant on the motivational force to shape its form, to refresh and reinvigorate.

Kirlian feedback for a happy balance

The Kirlian photograph is remarkably responsive to fluctuations in your state of happiness and well-being.  If you are upset the field generally develops gaps and weaknesses in certain areas and if you calm the waters of your emotions the field generally responds of becoming stronger and more congruent and brighter.  We can use the kirlian photograph as feedback that can help us to adjust and create the conditions for happy balance.