‘And every shepherd tells his tale, under the hawthorn in the dale’ John Milton, Allegro. 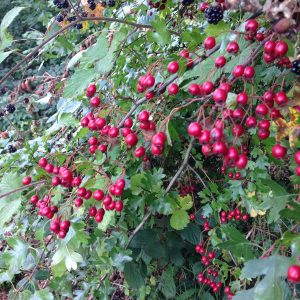 Hawthorn is a thorny shrub, a member of the rosaceae family of the genus crataegus which has hundreds of varieties. The species usually used in medicine is oxyacantha, synonym laevigata, and also monygma. The berries are the part most often used, but also the leaves and flowers.

Hawthorn heralds Spring with masses of pink or creamy blossoms, and in Autumn produces clusters of ruby red berries that provide a feast for birds and wildlife.

Hawthorn is a popular hedging tree; the word Haw is an old word for hedge. In England the hawthorn is known as the Thorne tree and also as May, a symbol of hope, adopted by the pilgrims for the ship that took them to their new life in America.

Crataegus has been known since ancient times, written of by Dioscorides, but emerged properly as a heart remedy in the 19th Century. Dr John Henry Clarke, a renowned homoeopath, in his Dictionary of Materia Medica, tells us that:

‘Crataegus was introduced into medicine as a heart remedy by Dr Greene of Ennis Ireland, and it has been used empirically with much success in cases of heart’ and ‘Crataegus is the nearest approach to a positive heart tonic that I know of…but it is not a heart poison like Digitalis, and has no cumulative action.’ 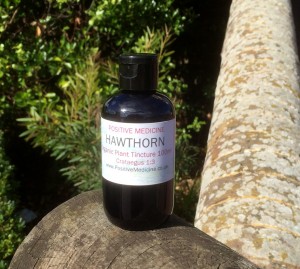 He goes on to say that his ‘preferred dose is 5 drops of tincture 5 x daily’ and that the mind symptoms include a hurried, flurried feeling and the mental state is one of irritability, crossness and melancholy.

The story goes that Dr Green never revealed the source of his success with ‘hearts’ during his lifetime, but after his death, his daughter gave the knowledge to the world of medicine.

Hawthorn dipped in popularity with the advent of stronger drugs such as digitalis, until the middle of the twentieth century, since which time it is widely prescribed by doctors in Europe, especially in Germany. Hawthorn has been the subject of numerous studies, performing well in comparison with other drugs, and showing an impressive degree of safety with efficiency.

Today, in phyto-medicine, Hawthorn is considered an important cardiac tonic and circulatory regulator, to open the small arteries, thereby increasing local blood supply, increase tissue oxygenation and lower the blood pressure. It nourishes the heart and strengthens the beat. It acts favourably on lipids, making it a great helper in treating furred arteries. 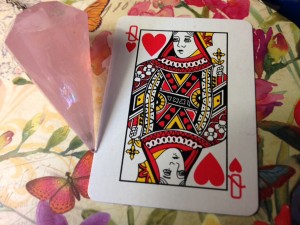 Hawthorn is rich in folklore and symbolism. Legend tells us that Joseph of Arimathea visited Glastonbury in England with the Holy Grail, pausing on a walk up Wearyall Hill to rest his staff on the earth – from where it sprouted into a special Hawthorn tree that has the distinction of flowering twice yearly, once at the usual time of May and again at Christmas.

Thorn is known as ‘the faerie tree’ appearing in folklore along with the fairy queen, a tree for sacred groves, long with Oak and Ash. The site of Westminster Abbey used to be called Thorney Island, named after this tree.

The Bread and Cheese Tree

In past time the Hawthorn was much valued by householders. The wood is strong, close grained and beautiful. Mrs Grieve says it takes a fine polish. The root wood was often made into small objects; tool handles, engravers blocks and boxes.

Hawthorn berries have a traditional role in the Autumnal preserve making, being turned into jams, jellies, liqueurs and ketchups and even though they are small and rather mealy, they
have become popular with foragers in more recent years. Alya Fowler writing for the Guardian gives a recipe for a fruity ketchup.