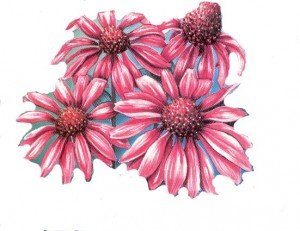 The Echinacea plant has long standing in the herbal world as a medicine to assist in fighting infection and boosting the immune system.

It is widely found in North America and it forms part of the Daisy family.

It was widely used from the 1900 in combating the common cold or reducing the severity of symptoms. It also has many other properties that we will discover further on.

The common belief is in its effectiveness against the common cold. The Native American Indians did not use it for this ailment specifically. A variety of different tribes did use it for sore throats or coughs etc but it was only when a man named Wallace Sampson claimed that a Swiss Herbal Maker was told by the Native Indians that it was an aid for cold prevention that its popularity rose.

Echinacea contains a variety of volatile oils some of which we have all heard of and these are what some researchers believe help the bodies’ immune system in combating infections etc. The roots of the plant contain essential oils, flavonoids, inulin, polysaccharides and Vitamin C.

These days Echinacea is considered for its assistance in building the immune system but its history dating back to the Native Indians shows they believed it had other intrinsic qualities. They would use the plant for a whole array of ailments including snake bites!

It is widely believed nowadays to assist the body by supporting the immune system. People like to take Echinacea as a tincture in order to prevent the onset of a cold or flu and also for various other ailments including the healing of the stomach and the entire gastrointestinal tract and taken for acid indigestion, gum disease, migraines, tonsillitis and urinary infections. The belief that it helps fight infections of many sorts has raised its popularity.

The Common Cold Centre in Cardiff University did do a study in 2012 in the journal Complementary and Alternative Medicine claiming that if healthy adults were given Echinacea every day for 4 months it was possible to see a reduction of colds and their duration of up to 26%.

One other benefit which is widely unknown is the role of Echinacea as an anti-inflammatory. It is stated that inflammation is ‘the root of most diseases.’ Factors such as stress, lack of sleep and toxins all contribute in causing inflammation. The University of British Columbia claim that regular consumption of Echinacea can effectively reverse and alleviate various types of inflammation including rheumatoid arthritis. Perhaps this ties in with the older uses of Echinacea as an ‘alterative’ which seems to be the chief use in this extract from an early herbal pamphlet. 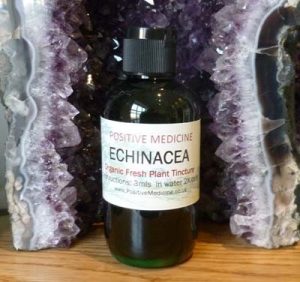 An extract from a short version of Echinacea the Plant by H W Felter MD issued by Lloyd Brothers, Pharmacists Inc. Cincinnati, Ohio. … ‘Echinacea is a remedy for auto-infection, where the blood stream becomes slowly infected either from within or without the body. Elimination is imperfect, the body tissues become altered, and there is developed within the fluids and tissues septic action with adynamia… It is, therefore a drug indicated by the changes manifested in a disturbed balance of the fluids of the body, resulting in tissue alteration – be the cause infection,…..accumulations, or alterations in the blood itself. Catarrhal bronchitis are disorders in which it has been used with benefit, and it is said to ameliorate some of the unpleasant catarrhal complications.

Used externally for: eruptions; insect bites and stings and to relieve itching in urticarea’

Click here to go to our Organic Tinctures page which includes Echinacea Tincture and also Echinacea and Elderberry Syrup which is great for coughs, colds and flu.