Organic bilberry tincture improves eyesight, memory, and circulation. Bilberries are one of the richest sources of antioxidants as well as being good sources of Magnesium and Vitamin C. 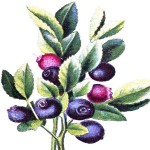 Used as a nutritious wild food for centuries.  The first mention of medicinal use appears in the works of Abbess Hildegarde of Bingen, a 12th Century visionary nun who was an herbalist, artist and author. She recommended Bilberry for several purposes including as a menstrual and respiratory tonic. In the 16th Century Bilberry was used for digestive upsets and scurvy.

Its resurgence as a superfood began with the discovery of its effect on night vision and was further stimulated by the discovery that it has one of the highest levels of anti-oxidant activity of all foods.

Science: Bilberries are rich in anthocyanosides, compounds in the plant’s dark blue pigment which are powerfully antioxidant and protect delicate tissues.  An Italian trial used Bilberry and Vitamin E on people developing cataracts  The progression of the cataracts was stopped in 97%.

Research programmes since 1964  have produced promising results for Bilberry’s positive effect on micro-circulation and improvement in peripheral blood flow. In 2004 a Agnes Rimando presented a paper reporting on three new compounds called stilbenes, found in the blue pigment of Bilberries and Blueberries called: Piceattanal, Reserveratrol and Pterostilbene These compounds have been found to lower LDL or ‘bad’ cholesterol and triglycerides by a similar action to cholesterol-lowering drugs called fibrates.  According to the scientists the compound pterostilbene triggers a mechanism that causes the breaking down of the lipids, fats and cholesterol.