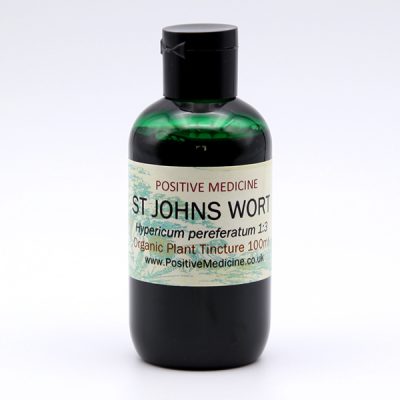 Notes: St Johns Wort tincture is useful in nervous problems with anxiety, tension & insomnia. Can be used as a nerve restorative & can be helpful in reducing attacks of herpes zooster. St. John’s Wort tincture has anti-inflammatory properties and is strongly anti-viral.

Known by its botanical name of Hypericum, this tincture can also be used externally as an anti-septic vulnerary & helps protect against tetanus & septicaemia. Useful for puncture wound, stings and animal bites. It is often combined with Calendula and known as Hypercal.

History: St Johns wort has been documented by Hippocrates, Pliny, Dioscorides, Galen, Paracelsus, Gerard and Culpepper. Dioscorides wrote that this herb was good for balance and equilibrium. Culpepper’s herbal describes St. Johns Wort as a wound healing herb that was also useful against stings and bites of animals and insects. Since the 16th century this herb has been extensively used for wounds, bites and bruises and particularly nerve injuries.
Science: In 1996 the BMJ published a meta-analyis of 23 randomised trials which demonstrated effectiveness of st Johns wort in depression. The Centre for Complementary Health Studies in Exeter made a critical assessment of 18 clinical trials n St Johns Wort. They concluded that 11 studies met the rigorous acceptable critieria and that St Johns Wort was superior to placebo and equally as effective as the standard medication in mild to moderate depression. Subsequent trials have all confirmed the effects.The anti-viral properties of this herb are the subject of intense ongoing research. (Gulick.Ann.Int.Med.1999)
In 15 clinical trials volunteers given placebo exhibited more side effects than those who got the st. john’s wort: In a Study by German scientists on the efficacy of St Johns Wort or Hypericum used externally, 2nd & 3rd degree burns healed 3 x faster when treated with St Johns Wort. St. John’s wort is known to inhibit the effectiveness of some drugs so if this is a concern to you, advice should be sought of a medical practitioner.