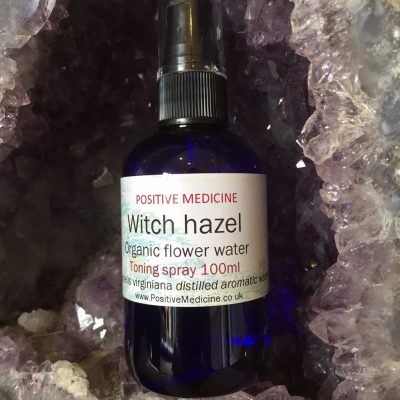 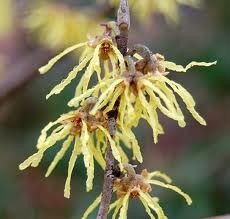 Witch hazel flower water is a perfectly lovely skin tonic and is used to spray or pat on skin to tone. It has a deliciously fresh woody scent.

This preparation of witch hazel flower water is an authentic distillate containing the droplets of essential oils in suspension. We present our product in a PET bottle with atomiser for convenience & ease of use.

It is an astringent cleansing purifying toning alcohol-free organic skin tonic used in many skin care preparations.  Witch hazel is valuable for its tonic properties. Also, recently for anti-oxidant activity. There are very likely many more thus far undiscovered benefits to this small tree.

Recent discoveries and insights have awakened a collective interest in investigating whole plants. The whole of the plant – not the separated so called active parts. The whole plant is far more than the sum of its parts.

Witch hazel was a favourite plant medicine of many indigenous Indian tribes who introduced it to some of the interested pilgrims.

One of the earliest and most famous preparations was Ponds Cold Cream. An all purpose skin cream made from distilled Witch Hazel. This resulted from an association between an American – Theron Pond and an American medicine man of the Oneida tribe. Thereafter, he introduced him to the Hamamelis shrub/small tree and its many uses in soothing and healing skin.

In subsequent years distilled witch hazel became established in bathroom cabinets throughout England. A standard treatment for sore skin, insect stings, varicose veins and bruises. Additionally as a stalwart of the beauty counter used as a favourite skin toner. Particularly for oily skin or where prone to acne.

Therapeutic benefits of witch hazel have long been attributed to its astringency. Although, there is some talk in recent years of information on potential anti-oxidant and anti-viral properties that need further verification.

Still there are few clinical trials and most information is anecdotal. However, This pubmed trial has shown some positive skin result